This is Art Asleson’s story (in his own words) as told to Troop mate Les Holmes.

I am from Nipawin, Saskatchewan, where I played a lot of hockey. My last team there was the Nipawin Juveniles. I then played for the Humbolt Indians for 3 years, from 17-19 years of age. Under a Boston Bruins sponsorship I went to the Hershey Bears of the American Hockey League and the Grand Rapids, Michigan International Hockey League. The following year I played for the Victoria Cougars and finished the season with the Kamloops Elks the year after they won the World Senior Hockey Championship.
In 1955 I joined the RCMP and took my training in Regina. There were 12 Troops and I’m not sure how many hockey teams, but our A Troop won the Depot Hockey Tournament. Bob Ellis often said it was thanks to John Annand and me, said we were the best!

From training I was transferred to “A” Division, Ottawa where my main occupation was playing hockey for the “HQ” hockey team. I knew from the Training Officer, Insp. Robertson, before I left Depot that I was going to Ottawa to play hockey. We won the Championship and Commissioner Nicholson said we could go anywhere we wanted. I chose North Battleford because it was near home and Saskatchewan is the best Province in Canada.
From North Battleford I went to Meadow Lake where they had a hockey team. I then went to Lloydminster and played Intermediate A Hockey for the Lloydminster Chevies. We were in the playoffs with Maidstone and they said I had threatened their star player by telling him to keep his head up. I was accused of playing too rough. As a result, I received a phone call from S/Sgt. Stevenson saying I was suspended – not by the league but by the RCMP – until they had completed their investigation. Needless to say, it took some time and we lost out to Maidstone. The next morning the Staff phoned to say they had completed the investigation and found nothing to substantiate the complaint.

After about 5 years of service I applied to go north. I was transferred to Fort Smith, “G” Division. Fort Smith was the Capital of the Territories at the time. From there I went to Inuvik for a time and that spelled the end of my hockey career.
From Inuvik I went back to Lloydminster. I went back to the Chevies and the league never did suspend me. I left the Force after 10 years of service.

I then went into the cattle business and had a feedlot. We had up to 600 head of feeders and 250 cow/calf operations.

An ex-RCMP Corporal approached me and suggested I go into the oil business. There was an opening at Hay River, NWT, to manage an Imperial Oil Bulk Plant. I had married on the 3 year plan at Meadow Lake and the RCMP sent me to a penalty posting at Lloydminster. By the time I went to Hay River I had 3 kids in Lloydminster and one more in Fort Smith for a total of 4, a boy and 3 girls.

I spent 10 years in Hay River. I had the contract at the airport and all the fuel that was shipped into the North and up the MacKenzie River went through my operation. While there a troop mate, RCMP pilot Nev Saunders flew in and refueled his plane, and we had dinner together at my house. On another occasion, I briefly saw Les Holmes at the airport, on his way to run a polygraph test.

At this time I was also a major shareholder in Arctic Offshore, with a fleet of vessels servicing the offshore oil rigs in the Beaufort Sea. I was also a Justice of the Peace in Hay River, in and for the Northwest Territories. My wife ran boutiques, The Present Place at Hay River and Jacqueline’s Ladies Wear in Fort Smith. Things were looking pretty good.

My wife and I started having problems. I decided to get out of the Bulk Plant. I was taking a more active role in Arctic Offshore and NWT Coach Lines which I owned outright.
In 1984 I went to Victoria to purchase a bus from Pacific Coach Lines. The chief negotiator for the PCL turned out to be troop mate, Bob Ellis!

In my role with Arctic Offshore I was traveling back and forth between the NWT and Nova Scotia. I opened an office in Halifax in order to facilitate leasing, etc. for the offshore supplies to Sable Island/Hibernia Oil Exploration. When Trudeau shut down offshore drilling we had 13 supply vessels we couldn’t find work for anywhere in the world. We had 3 supply ships being built in the U.K. at the price of 22 million dollars each. We had to go into receivership as interest rates were 22% and we were paying 22% interest on an Icebreaker we bought in Sweden for 1 ½ million dollars.

About 1982 I sold the bus line to a competitor in Yellowknife. I managed to make money on the bus Bob Ellis had sold me. While I was in Halifax I saw Bill Munroe. He was in uniform. I closed my offices and moved to Vancouver. I went into the Insurance business and did that for 5 years. I then ended up with the Toronto Dominion Bank where I looked after the post office and was the Vice President’s chauffeur.

I came down with Parkinson’s Disease in 1997 and decided to retire. I have my own apartment on Vine Street in Vancouver, nicely done up by my daughter. I work out in a gym close to home every second day and walk 2 miles every other day in an attempt to beat this Parkinson’s Disease. I think I am making some progress.

I would have liked to go to the Troop Reunion in Calgary in 2001 but find it stressful to travel by myself and I require a stable environment. Since retiring to Vancouver I have enjoyed frequent ‘lunches out’ with troop mates Bob Ellis, Les Holmes, occasionally Harley Rea, and often Les’ wife Violet. Thanks to their encouragement we traveled together to the 2005 Regina AGM and 49th Reunion of A Troop 1956. Our party of 4 was a challenge for the West Jet flight crew – Bob with his oxygen, me with Parkinson’s, and Les with his left leg in the aisle due to recent knee replacements – Violet was deemed Troop Nurse!

I had not been to Depot since training. The flood of memories was quite overwhelming. Once I relaxed, it felt good to mingle, especially on the Parade Square and over lunch in the Mess, and seeing the Chapel. At the troop reunion everyone looked surprisingly familiar, even though some had not seen each other since training. There were stories – 49 years of wild stories – and seemingly continuous laughter”

POSTSCRIPT: by Violet and Les Holmes
The trip to Regina was an adventure for us all and provided stimulating conversations and hearty laughter during future lunches out. While in Regina, Don Salt invited Art to go sailing with him in Nova Scotia in the summertime. Although it could not happen, the anticipation brought a huge smile to Art’s face each time we spoke of it.

Due to the progression of the Parkinson’s Disease, Art moved to an Assisted Living Residence, the Royal Arch Masonic Home in Vancouver. Although less active now and less speech, his love of hockey never waned. On our visits he was invariably wearing the latest in Canucks Hockey Caps, and became quite animated if there was a game on his TV, always flashing that awesome smile, so heart-warming, unforgettable. That was the case when we visited in January, 2018. Not so by April!
It was an honour and a privilege to be there for Art during his last days, along with a loving family that came from far and near. We all tried to help ease the transition – tried to sing him to heaven – with the soft singing of Amazing Grace – and the reassuring words of Psalm 23, “The Lord is my Shepherd, I shall not want … and I shall dwell in the house of the Lord forever” … all the while someone by his side, holding his hand … .

On April 14, 2018, Art’s son Mark sent us a “ties that bind” picture with text: “Dad passed away peacefully, he waited for the morning sunshine … we are grateful for your visits, open hearts and generosity, for sharing yourselves and stories with us and Dad. The songs and prayer have been a unifying and galvanizing force … this picture of the two buddies, hands together 60+ years after they first shook hands as new troop mates is such a symbol of the ties that bind us all together ….” Regimental # 19204, Veteran Art Asleson passed away on April 14, 2018. 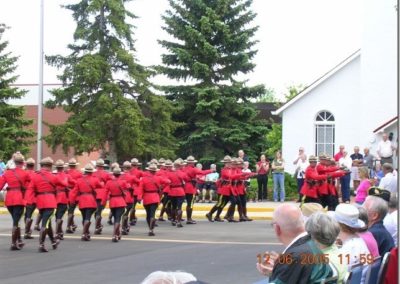 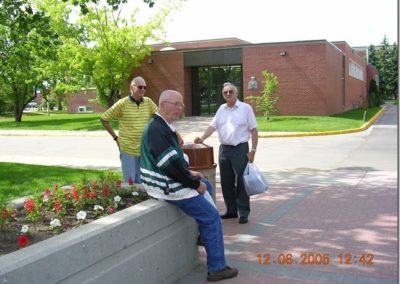 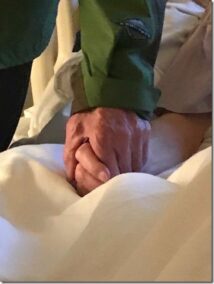 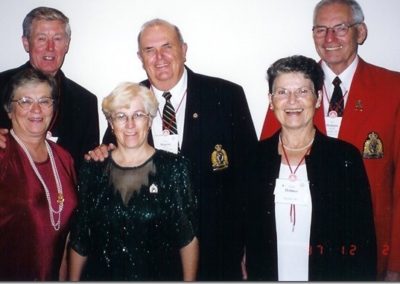 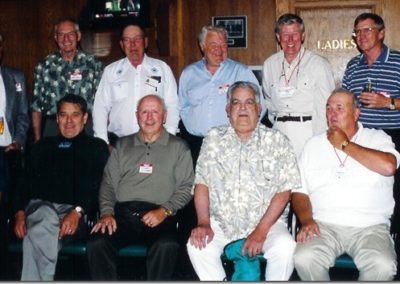 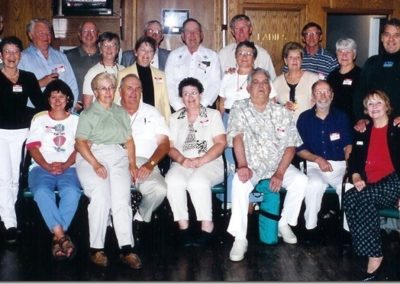 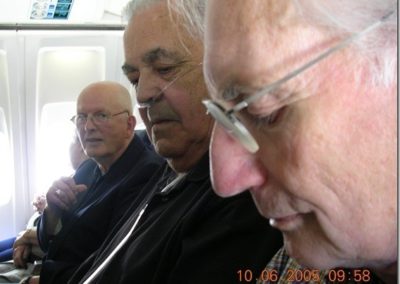 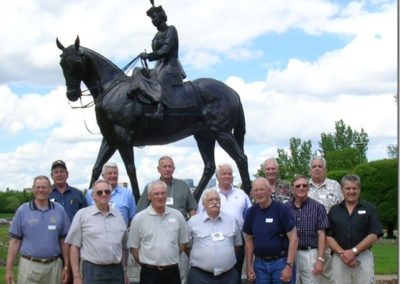 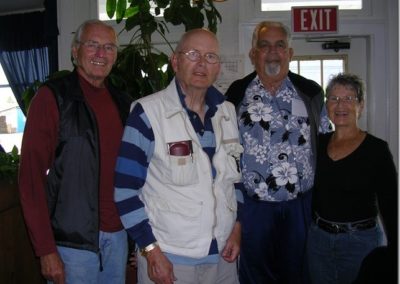 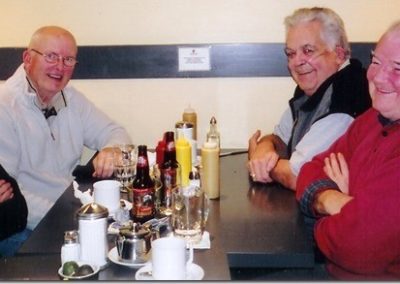 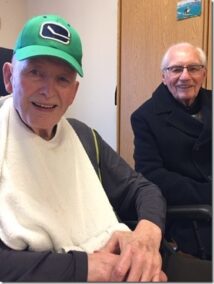 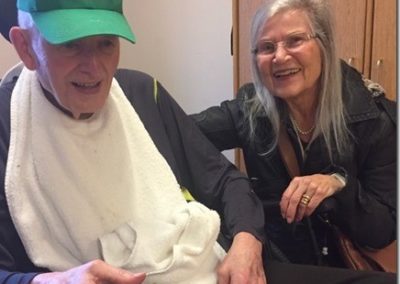