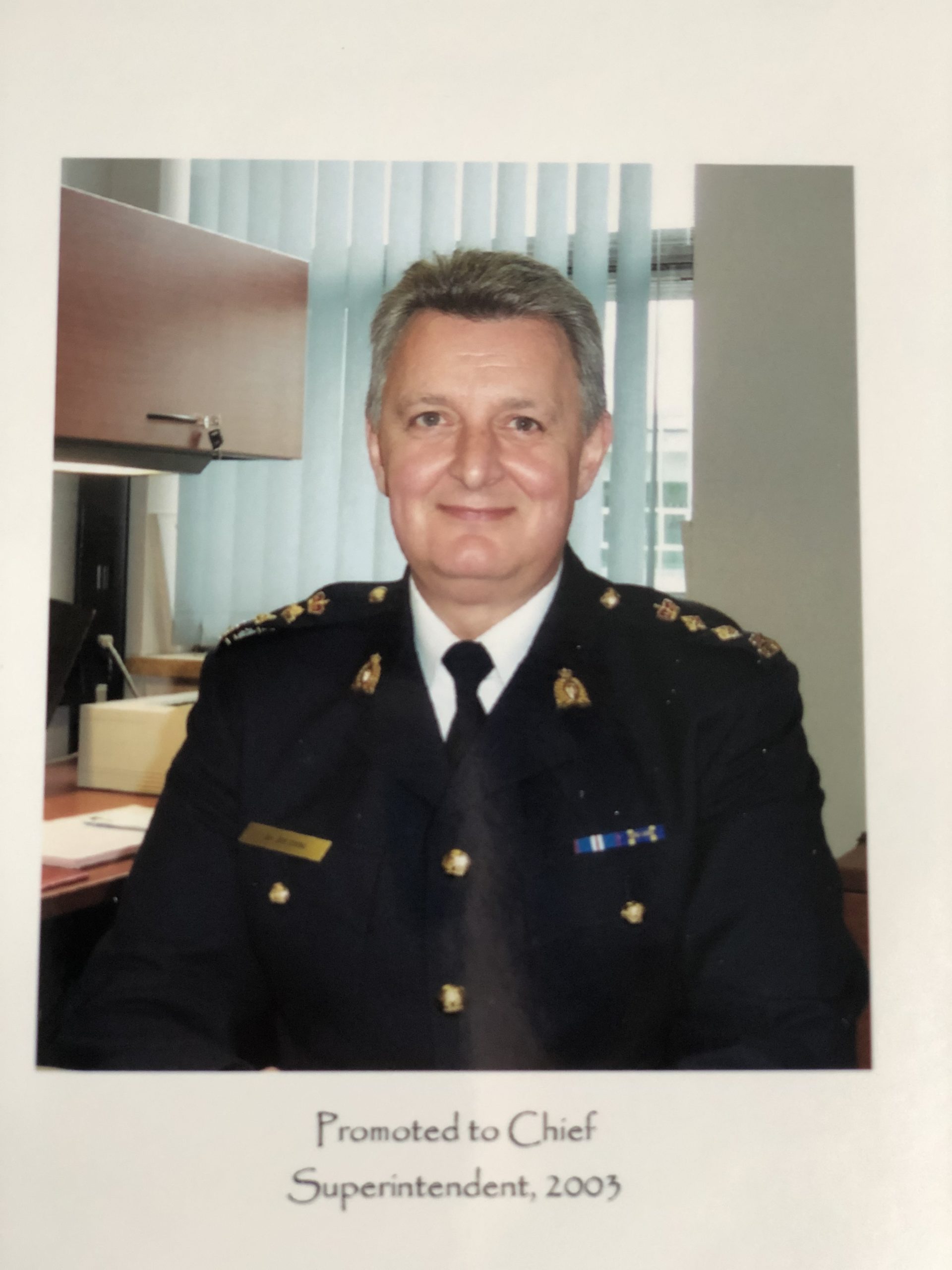 Jim Brezovski, the middle of five children, grew up on a farm in Valleyview, Alberta. He was interested in studying law, however, university enrolment was not financially feasible and, at 19 years of age, he joined the RCMP.

Following graduation from Depot, in August 1971, Constable (Cst.) Brezovski transferred to his first post in ‘E’ Division at North Vancouver Detachment, assigned to General Duty Patrol. Among the highlights, from the seven years he served at North Vancouver, were: serving as a Recruit Field Trainer; two successful long term undercover operations – the first, in Kelowna, British Columbia and, the second, in Thunder Bay, Ontario; and, meeting his future wife, Cst. Adrienne Moncrief.

In March 1977, following graduation from Depot, Cst. Moncrief transferred to North Vancouver Detachment, as her first posting, and was assigned to General Duty Patrol. It was during a briefing in the Detachment’s Drug Section, in preparation for Cst. Moncrief’s first undercover assignment that the two met and, unexpectedly, began a personal relationship that lasted 27 years, until the time of his passing.

In 1978, when the couple decided to marry, approval, by the RCMP was required, and a transfer for Cst. Brezovski to Maple Ridge Detachment, General Duty Patrol, was arranged, clearing the way for the couple’s marriage the following year.

Cst. Brezovski enjoyed the four years he served at Maple Ridge Detachment. Having participated in ongoing in-service training, Cst. Brezovski held numerous qualifications, including that of: undercover operator; breathalyzer operator; and hostage negotiator. While posted at Maple Ridge, he also served as a Recruit Field Trainer and was assigned to both General Duty Patrol and Traffic Services. His greatest delight was being asked to establish the Detachment’s first Drug Section and, with this responsibility, he received his first promotion to the rank of Corporal (Cpl.). In off hours, he enjoyed the camaraderie of colleagues and also played hockey on the Detachment’s Hockey Team.

In August 1982, having served in the RCMP for 11 1/2 years, Cpl. Brezovski decided to pursue his long held interest in studying law and resigned to pursue a postsecondary education. Coincidentally, his wife, then posted with the Vancouver Commercial Crime Branch, had been selected to attend the RCMP sponsored One Year Non-Degree Program at the University of British Columbia (UBC) starting in September 1982, making it an interesting year of full-time study for the couple.

In 1987, when Jim had completed his Law Degree (LLB) at the University of Victoria, the RCMP had recently approved policy which allowed former members to rejoin. Given this consideration, together with the new opportunities for members with legal training and his wife’s continuing career (in September 1987, Cst. Moncrief was sponsored by the RCMP to attend the three year Law Degree Program at UBC), Jim decided to return to the RCMP and re-engaged in January 1988.

Following re-engagement, Jim returned to Depot for three weeks of re-introduction training and, at the rank of Cst., was posted to ‘E’ Division’s Burnaby Detachment and assigned to General Duty Patrol. While posted at Burnaby Detachment, Cst. Brezovski was given the added responsibility of Recruit Field Trainer, an experience he quite enjoyed.

Within a short time, a Cpl. ‘Legal Analyst’ position became available in the ‘E’ Division Criminal Operations Policy Unit and Cst. Brezovski won the promotion to Cpl. and transferred to the Unit. At that time, the Criminal Law and Police Operations were rapidly changing with such significant influences as the Supreme Court of Canada’s interpretation of the ‘Charter of Rights and Freedoms’. It was a significant period for Criminal Operations Policy development and gave Cpl. Brezovski the opportunity to serve as the RCMP’s drafter of: the first Tripartite Policing Agreement with the Stl’atl’imx First Nations Community in the Province of British Columbia; and the ‘Charter Warning’ that was used in ‘E’ Division at that time.

The following year, when promotional opportunities became available at Headquarters, Ottawa for both Sergeant (Sgt.) Brezovski and his wife, the couple transferred to Ottawa. Sgt. Brezovski was offered the position of Appropriate Officer Representative and, accepting it, was promoted to the rank of Staff Sergeant (S/Sgt.). In 1994, when the RCMP decided to civilianize the Appropriate Officer Representative function, S/Sgt. Brezovski took the opportunity to attend full-time French language training.

Following completion of French language training, S/Sgt. Brezovski accepted an invitation to work with Division Staff Relations Representatives on a RCMP Project examining ‘Separate Employer Status’ for the organization. In 1997, when the work his wife, S/Sgt. Moncrief, had been doing, on the five year review of the ‘RCMP Act’, was integrated with the Project examining ‘Separate Employer Status’, both members found themselves engaged in the same Initiative but, from different perspectives.

When the examination of the Project on ‘Separate Employer Status’ completed, S/Sgt. Brezovski continued working with Division Staff Relations Representatives, participating in the establishment of the RCMP Pay Council. From that posting, S/Sgt. Brezovski transferred to Audit and Evaluation Branch.

In 1999, S/Sgt. Brezovski accepted a commission and promotion to the rank of Inspector (Insp.) to undertake a nine month mission to Haiti as part of the RCMP’s International Police Peacekeeping and Peace Operations Program. An unexpected health diagnosis resulted in Insp. Brezovski accepting an alternative position as Office in Charge (OIC) of the External Review and Appeals Section (ERAS), providing staff advice to the Commissioner.

In 2001, Insp. Brezovski was promoted to the rank of Superintendent (Supt.) adding the responsibilities of the OIC Executive Services and Ministerial Liaison Unit to his continuing responsibilities as the OIC ERAS. Also, in that year, both Supt. Brezovski and his wife completed 25 years of service and were awarded the Bronze Long Service Medal.

The following year, in 2002, both members of the couple were honoured with the award of the Queen Elizabeth II Golden Jubilee Commemorative Medal in recognition of their significant achievements and distinguished service to their fellow citizens, community and to Canada.

In 2003, Supt. Brezovski was promoted to the rank of Chief Superintendent (C/Supt.) and mandated with the responsibility of merging ERAS and Internal Affairs Branch, establishing a new Directorate, “Professional Standards and External Review”.

In November 2004, C/Supt. Brezovski passed away while serving as Director General of Professional Standards and External Review.

In the 28 1/2 years that C/Supt. Brezovski served in the RCMP, he established a legacy of accomplishment in many areas including: Drug Enforcement; Criminal Operations Policy; Member Representation; and Professional Standards and External Review. Perhaps, more importantly, he will be remembered by many with whom and for whom he served as a person of integrity, professionalism and compassion.