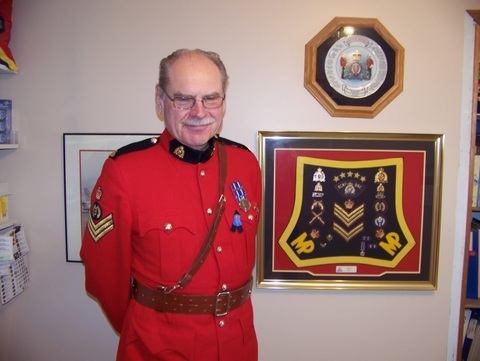 PRE-RCMP BACK GROUND
Born in Prince Albert, Sask., December 22, 1943. In those days Dad only had horses for transportation. But there was a Spiritwood RCMP Sgt. Arthur Argent that Dad and the farming community knew quite well and he very often visited the farm near Resolute School. Dad always was a big hearted man and any time the police car showed up Dad would give him a sack full of spuds or cow’s cream that was stored in a dried out water well with dugout ice tossed in as there were no hydro lines in that area. Anyway, Dad asked the Sgt., if he would mind bringing his son home from the train station in Spiritwood as he was arriving from Prince Albert by rail. The Sgt. mentioned that he had to take a prisoner to Prince Albert so after dropping him off he would pick up my wife and son. I was only nine days old when I had my first ride in a police car. Had that ride made my career choice?

I left high school before completing high school grades as I did not want Mom & Dad paying rent for my Spiritwood accommodation. I worked on a farm near Spiritwood until I injured my wrist and could not get immediate surgery to remove broken off part of my wrist bone.
A former Spiritwood neighbor was a manager at the “Meads Hardware” store in Eston, Sask. This manager somehow became aware of my situation and asked if I would assist him and learn how to run the store as he was being transferred to Alberta in a few months. I really enjoyed the job, and the 2 female staff, as I was meeting wonderful customers and helping them with products etc. It was the helping of people that I really enjoyed.

There was an RCMP constable boarding at the same place I was renting in Eston, and he told me about an RCMP member from Regina was coming and could bring the exam. It was a short time later while still manager of MEAD Stores in Eston, that I had the opportunity to write the RCMP exam, which I passed.

Being a recruit at that time was an experience that was very challenging, demanding and intense, but something that I did enjoy going through to build a better me. Our troop started with 32 members but we lost one because of injuries to both his feet. During drill marching we were told to lift our foot up 12 inches and drive it down 14 inches. Depending on a particular marching order with turns, or maneuvers either foot would be used to do the FIRM drop down. Unfortunately, one of our troop candidates encountered fallen arches in both his feet which gave him a medical discharge.

Our “S” Troop was the last troop to perform the musical ride program on our graduation date. After that some of the horses were shipped to Ottawa to continue with the musical ride. Some of the older horses were sold, many were purchased locally, and the buyers told the Depot Commanding Officer that if there was a function that required a horse to be ridden that they would gladly bring the horses back for that function.

I joined the R.C.M.P. in March 1966 and have gained experience in a wide variety of areas since that time. My work history includes duties such as general police duties; highway patrol; general investigation; instructor; reviewer/analyst/developer for policies regarding the Privacy Act, Access to Information Act and for all training programs offered at the R.C.M.P. Training Academy; and developer/designer/implementor of training programs for R.C.M.P. personnel, supervising both male and female personnel, involved in training, administrative, security, investigative and personal functions, including designing, developing and implementing a functional unit for statistical reporting purposes regarding Bill C-43 Legislation proclaimed July 1, 1983, at Headquarters, Ottawa. Other federal government departments (i.e. Department of Fisheries & Oceans, Canada Employment and Immigration, and Transport Canada) and provincial agencies (i.e. Dakota Ojibwa Tribal Council Police, Manitoba and Saskatchewan Department of Highways & Transportation).