I was born and raised on a small family farm approximately 10 miles south of the village of Minton, Saskatchewan, near the Montana border.  I joined the RCMP on April 5, 1961, in Regina, SK, and began training there as one of 32 members of ‘L’ troop. We graduated on December 12, 1961, and I was posted to ‘E’ Division, where I served at Kamloops, Vernon and Clearwater, BC. My original posting was to Kamloops, but I was sent onto Vernon Detachment to replace a young Constable, who in turn took my position at Kamloops. He and two other members were killed six months later in June 1962. I have thought of this young man many times since and how his fate could easily have been mine.

I purchased my discharge in October 1962, then re-engaged on March 1, 1965. In the meantime, I married Jean Leatherdale of Gladmar, SK on November 3, 1962. I was immediately posted to ‘A’ Division where I served on various units in Ottawa. One of
these was the provision of security to Prime Minister Lester B. Pearson and Governor General Georges Vanier, who I got to meet personally. I still possess a Christmas card we received from the Governor General, which contained his signature and a picture of him and his wife.

In July 1967, we were transferred to the 3-man Pembroke, ON Detachment, located approximately 90 miles northwest of Ottawa. Our work there was in plain clothes and dealt mostly with Federal statutes and security clearance investigations. Our territory covered all of Renfrew County and a part of Pontiac County in the province of Quebec. So, we were extremely busy and often short-handed in those days of no pay for overtime. I did receive a complimentary letter from the OIC Security and Intelligence Branch and from my Officer Commanding for a security investigation I had conducted and reported on; as they stated, “Perusal of the report reveals that the investigator put forth a commendable effort in the investigation and report….considering the fact that this member has not received formal training in S&I duties.”

In 1972, I was promoted to Corporal and placed in charge of Pembroke Detachment, at which time, my wife Jean, our 4 daughters and I, moved into the married quarters at the Detachment. My wife often had to answer the office phone and take enquiries at the door
when members were away on other duties. She received a brooch and Certificate of Appreciation from the Commissioner for her efforts on behalf of the Force in 2013.

In 1974, I requested a transfer to Western Canada, preferably ‘K’ Division, Alberta, and on July 1, 1974, I was posted to ‘D’ Division, The Pas Town Detachment. What a dose of reality into real police duties! Two corporals had left the Force, rather than take a transfer there, and the one I was replacing wined and dined us for 4 of the 5 days we were there on a house hunting trip, trying to convince us it wasn’t all that bad. It turned out to be an excellent posting for me workwise and we made many friends, both within the Force and in the civilian population that we still have today. A noteworthy incident in The Pas was a riot that three members, including myself, were involved with. We managed to keep the two groups who were fighting and disturbing the peace separated until such time as we were able to get in additional staff and a police dog to help put down the disturbance. No loss of life or serious injuries occurred.

In 1976, I was transferred and promoted as Sergeant in charge of Thompson Rural Detachment, which included a highway patrol unit. We were responsible for the rural area outside of Thompson, including First Nation reserves and Metis settlements at Nelson House, Split Lake, York Landing and Pikwitonei. This was a very busy detachment. We had to fly into three of the communities and had patrol cabins at two of them. I was stationed there for 22 months and we had 52 fatalities in this period of time. They ranged from murder, mine accidents, helicopter crash, plane crash, drownings, house and forest fires, and motor vehicle accidents. In York Landing, we had a hostage taking incident where an individual had wounded several people, including his brother. After about 16 hours of negotiations alternating between myself and a trained negotiator, I was able to convince him to give up his hostage and himself and end the situation without additional bloodshed. Shortly thereafter I was sent on a Hostage Negotiators course in Ottawa.

In July 1978, I was transferred to Minnedosa, MB, in charge of the Detachment and remained there until August 1985, when I retired from the Force. In Minnedosa, we found “Utopia” and have remained there in retirement to this day. After leaving the Force I was
employed by the Rolling River School Division as their Secretary-Treasurer for 16 years. I served for 8 years on the Town Council, one of these being as Deputy Mayor and served 7 years as the Mayor. I have been Chairman of our Christ Lutheran Church for several years. I also served as the town’s Emergency Measures Coordinator, a director on the Credit Union Board, a commissioner
on the Manitoba Liquor Board, a part-time Magistrate and a member, with 2 terms as President, of the Royal Canadian Legion Br #138.

A noteworthy incident while I was in Minnedosa was a car bombing attempt. The perpetrator prematurely activated the bomb, severely injuring himself. He ended up receiving a ten-year jail sentence.

I have had a wonderful and good life, a healthy and happy family, awesome communities to live and work in, and many fabulous friends, thanks to my life with the RCMP. In conclusion, I would say, hats off to the Force. To my family, friends, and the communities I have served, God bless and take care. 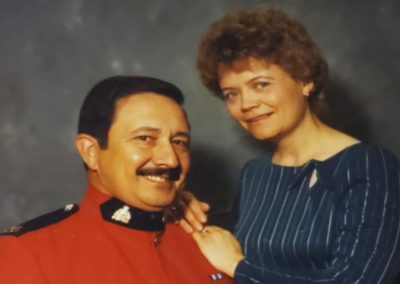