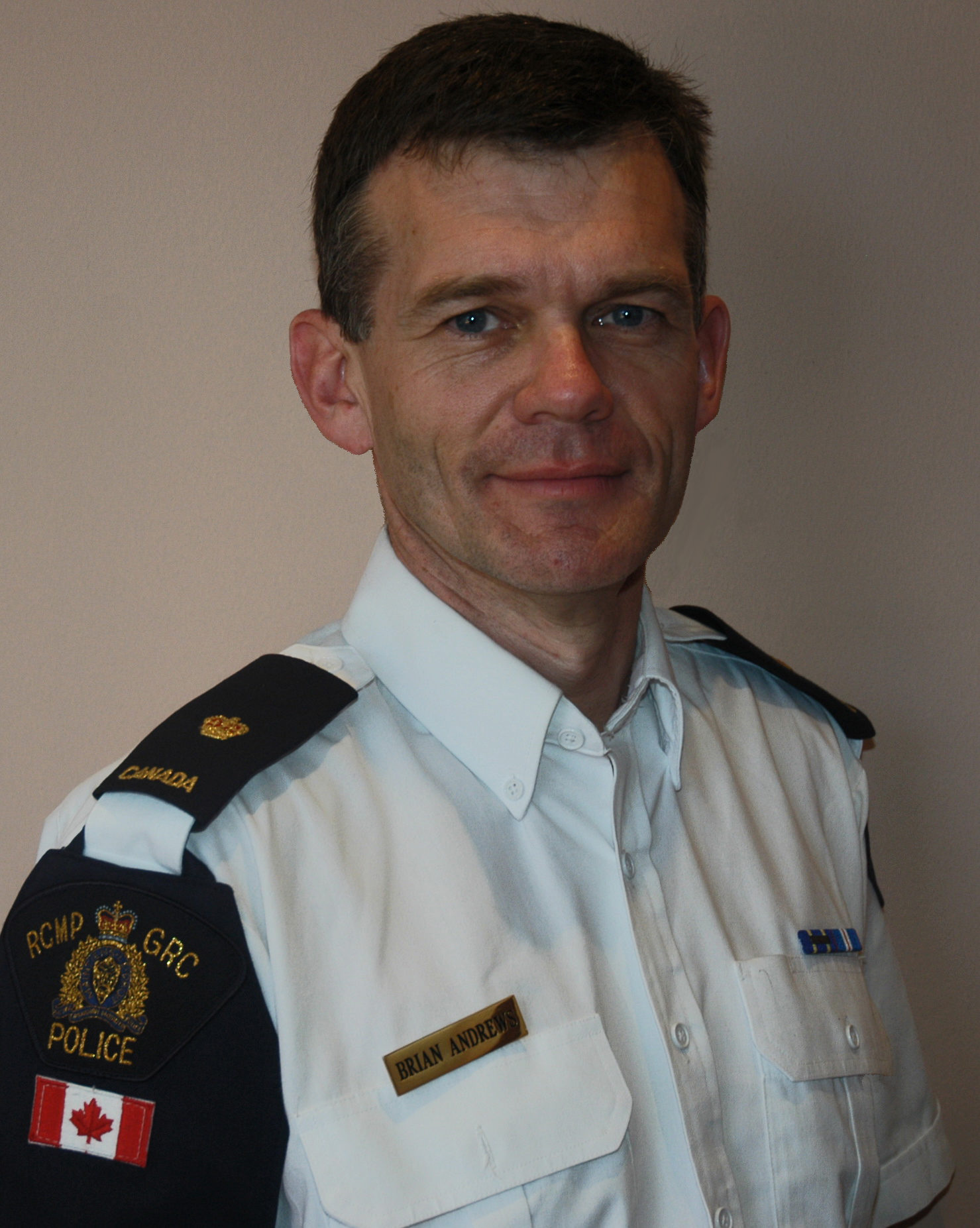 I was born in Corner Brook, Newfoundland and moved at a young age with my family to Oshawa, Ontario. While attending high school there, I met my future wife, Cindy, whom I later married in 1981. I went on to receive a Bachelor of Science degree from the University of Toronto. To support my post-secondary education, I worked at General Motors of Canada and a local pharmacy in Oshawa.

During my third year of university, a cousin and member of the RCMP spoke about forensic work within the force. This piqued my interest and prompted research into this potential career path. My goal was to join the RCMP and eventually enter the forensic laboratory which, at that time, was primarily staffed by regular RCMP members.

I joined the RCMP at Toronto HQ on May 30, 1978 training at Depot Division in Regina as a member of Troop 3 (78/79) graduating in November 1978. My first posting was Richmond, B.C. serving at that location for ten years in GD (General Duty); B&E (Break & Enter); and GIS (General Investigation Section). During this time, I experienced some high points in my career as well as the lowest one.

In 1984 during Pope John Paul II’s visit to British Columbia, I was part of his security detail, receiving from the Pope an autographed picture. In 1986, while doing crowd control during the Prince and Princess of Wales’ Expo 86 visit to B.C., Diana’s arm touched mine as she was reaching into the crowd. To this day, I still recount the story of my “royal brush”.

The lowest point in my career occurred in 1980 while serving on G.D in Richmond. A member on my watch, Cst. Tom Agar (Honour Roll #166), was murdered while working front counter duties at Richmond Detachment. A shootout ensued in the office during which another member was wounded before the suspect’s subsequent arrest. This was a life-altering event for all those involved. An annual fun run was organized in Richmond in Tom’s honour, with all proceeds going to support a high school scholarship in his name. When the run was ended in the late 1990s, all residual monies were given to Tom’s two daughters, the youngest of whom had not yet been born at the time of his death. At a special ceremony, I had the honour and privilege of presenting the cheques to the girls, who planned to use the money towards post-secondary studies. I know Tom would have been very pleased as he often spoke to me of how much he valued education.

In 1988, I was transferred to Burnaby, B.C., serving two years on G.D. During this time, I was tasked with organizing a regimental funeral for an Edmonton Police Service member who had been killed on duty. His family wished to have him buried in his hometown of Burnaby. To provide this essential service to both the friends and family as well as the Edmonton members was a very personally fulfilling experience in my career.

In 1990, I began to realize my ultimate career goal within the force. My goal had changed somewhat, since the Forensic Laboratory had been civilianized in the late 1970s. I wished to remain a regular member and set my sights on the Forensic Identification Service (FIS) which I entered in 1990. I was transferred to Richmond FIS and promoted to corporal and later transferred in 1997 to Coquitlam. B.C. FIS. In 2000, I was transferred and promoted to sergeant as the NCO i/c Surrey FIS (the largest within the RCMP). During my time within FIS, I examined thousands of property crime scenes and hundreds of major crime scenes, collecting evidence in support of investigations.

In early 2002, a major investigation was initiated into suspected serial killer Robert Pickton which proved to be the biggest serial murder case in Canadian history. The scene examinations took over two years centred on a farm in Port Coquitlam as well as various other locations. I was initially a co-leader of the FIS team and eventually the sole lead tasked with these examinations, which involved over 125 FI Specialists whom I brought in from across the country. As a result of the outstanding efforts of all the various agencies involved in this massive investigation, Pickton received a life sentence on multiple murder counts. It was personally satisfying to me that FIS played a major part in Pickton’s conviction and helped bring justice on behalf of the many female victims as well as some sense of closure for their families. In recognition, I was honoured to receive a Commanding Officer’s Commendation.

In late 2002, I was commissioned to the rank of Inspector as the Officer i/c Lower Mainland (Greater Vancouver) FIS overseeing approximately fifty forensic specialists.

In 2004, I was transferred (administratively) into the national position of Regional Manager of FIS for the Pacific Region (B.C. + Yukon) remaining physically located within the Greater Vancouver area. In this position I was the program director for the approximately 180 FIS personnel within the region.

In December 2004, a disastrous tsunami occurred in S.E. Asia and organizations from around the world responded to the call for assistance. I helped select and co-lead a team of ten FIS members from across Canada who traveled to Thailand as part of an Interpol-organized Disaster Victim Identification (DVI) effort. One inspector remained in Phuket to liaise with DVI operations, while I lead the remaining eight members to Krabi where we joined several other international DVI experts.

The Canadian team worked tirelessly as part of a morgue operation, playing a significant role in identifying over 600 deceased persons and thus repatriating them to their respective countries. Our team was honoured with a visit from Prime Minister Paul Martin, who met with us while he was touring the disaster scene in Thailand. Toward the end of our three-week deployment and after the work was completed, we had the pleasure of swimming with a baby elephant named “Yum-Yum” in the Andaman Sea, a truly well-deserved stress-relieving activity welcomed by all. A few years later, the team members were each honoured to receive a Commissioner’s Commendation in recognition of our efforts.

While the Thailand experience was the most rewarding of my career, it was undoubtedly the hardest my family had to endure. The call to travel to a distant land in extraordinary turmoil came during the Christmas season with no known date of return. The true scope of the disaster has not yet been revealed, and there was speculation that an outbreak of disease might occur. Despite the uncertainty, things at home had to carry on as normally as possible. Fortunately, our marriage has a strong foundation and together with our two sons we have a close-knit family. Because of this, I was able to have peace of mind about the domestic front while overseas and concentrate on the job at hand. The love and support of my family has been a constant factor throughout the difficult times in my career.

In 2010, I transferred to the position of OIC National Forensic Identification Support Service (NFISS) overseeing nationally bloodstain pattern analysts; DVI; and scenes involving chemical, biological, radiological, nuclear and explosive (CBRNE) events. In a changing world, being better prepared to deal with these types of threats has become increasingly important, both domestically and on a world scale. In this position, I had the honour of representing Canada on both the DVI Steering Group and the DVI Standing Committee at Interpol in Lyon, France.

In 2012, I transferred and served as the OIC FIS “E” Division, a position I held until retirement. During this time, I had the opportunity to work in the new “E” Division Headquarters, moving my office from Langley to Surrey in 2013. I retired in January 2014 after a nearly 36-year career within the force.

I look back upon my time in the RCMP with great pride and gratitude. I have met and worked with some wonderful and very interesting people over the years, both within Canada and internationally. I have had the privilege of helping people in times of crisis and the satisfaction of bringing a sense of closure to grieving families. My career allowed me to constantly challenge myself and continually learn new procedures and technologies. The increasingly important and ever-changing world of DVI afforded exciting opportunities and raised the profile of FIS both nationally and world-wide.

In retirement, I have remained active within the forensic world. I teach a fingerprint course during the winter semester at BCIT as part of a degree program. I am very pleased that some students have subsequently joined the RCMP and entered FIS. I also guest lecture on two other courses at BCIT. In addition, I am part of a faculty consisting of dentists and other professionals teaching a DVI course for international military dentists which has received world-wide recognition.